Agility is the ability to change the direction of the body in an efficient and effective manner. To achieve this, it requires a combination of balance, speed, strength and coordination. It brings together all of the fundamental movement skills and will be the most challenging for children. Once children have mastered balance and coordination, they will be ready to take on agility.

Here are some great ways to improve agility…

Using agility tables, create a course for children to manoeuvre over, under and around.

-Make it hard: make the course larger with difficult challenges.

-Make it harder: incorporate balance and coordination challenges such as completing the course then jumping onto a mat or holding a balance pose.

-Make it easier: create simple challenges such as using one agility table and ramp which children walk up and down.

-Games; using a stopwatch, set time challenges and create tournaments over who can complete the course the course quickest. Give points for balance and coordination.

What will you need? Agility tables, cones, stopwatch.

Play games individually and measure times or work in teams to complete the course.

Fast Football. Two teams competing, using cones to set up two goals, teams must kick the ball through the opposition’s goal to gain a point. Players can only touch the ball twice before passing or shooting. If they touch the ball more than this, the other team are given the ball.

-Make it hard: reduce the number of touches before passing or shooting to just once.

-Make it harder: reduce the size of the goals.

-Make it easier: Allow more touches or increase the size of the goals.

-Games; Use a stopwatch to set timed games or make games such as the first team to score 10 goals. 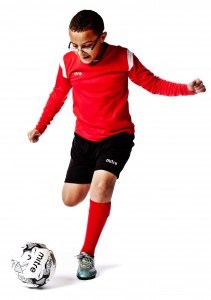 Throwing Hockey. Two teams competing, the aim is to role a ball to team mates at least five consecutive times before being able to shoot at a goal. If the ball is intercepted, the other team then starts with the ball. Mark goals and a playing court using plastic cones.

-Make it hard: throw and catch the ball instead of rolling it.

-Make it harder: throw and catch ball with weaker hand.

-Make it easier: roll the ball less times or increase the size of the goals.

-Games; Make games such as the first team to score 5 goals wins.

Using zones of coloured cones, children must run to the colours shouted by the teacher and touch it with their right or left hand depending on the teachers command. This familiarises children with random, unplanned movements.

-Make it hard: increase the speed of commands.

-Make it harder: involve new commands such as jump, hop or walk backwards.

-Games; using cones to set a course, shout commands until children have become comfortable to the challenge. Increase the challenge to continue progression and development.

What will you need? Plastic cones, whistles, stopwatch.

The possibilities are endless! Get creative and make these activities easier or harder depending on progression – and if you have an idea about any great games, please let us know.Measure and encourage development through the use of team games, personal bests and races, measuring times and distances with a stopwatch and whiteboard.

By working on agility, children will develop their reactions, alertness and flexibility. Not only will this will set them up for success in playing games and sports with their peers, it will also have a big impact on academic and life skills.

As always, ensuring children are safe during these activities is very important. It is important to use the appropriate matting and safety procedures when carrying out the above activities.